Track Runner
Vince Lestrade is an entrant and a professional track runner from Republia. He is noted on the front page of The Truth of Arstotzka on day 5 for allegedly killing his girlfriend in a "jealous rage".

Lestrade is the third entrant on day 5. If the inspector identifies his name on the newspaper, Lestrade claims it was a setup then tells the inspector to let him through. If the inspector detains him, he is taken away, and the next issue of The Truth of Arstotzka will mention his arrest.

If his entry is denied, he is apprehended in Kolechia the next day, as per The Truth of Arstotzka.

If the inspector approves entry, no citation will be issued, as all his documents are valid and up to date. The next day's newspaper will report that he has been spotted in Arstotzka.

Upon identification as the Vince Lestrade in the papers:

If denied or approved, regardless of being identified: 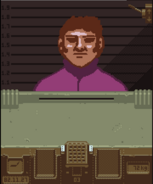 Lestrade in the booth with another randomly generated color scheme.

Lestrade's first appearance in the news.
Community content is available under CC-BY-SA unless otherwise noted.
Advertisement