Assassin
Khaled Istom is an assassin trying to ruin EZIC's plans. He becomes the man in red if denied entry and allowed to live.

Istom is the ninth entrant on day 20. Earlier that day, an EZIC messenger will come with a note explaining that Istom will target their agent in Arstotzka if the inspector lets him through. They will also give the inspector an envelope with a skull on the front and poison inside.

The inspector can choose to help EZIC by putting the poison on Istom's passport or ignore the EZIC request and let him through. Poisoning him will count towards getting ending 19 and immediately prevents getting ending 20. Denying Istom entry without killing him leads to a citation and makes him reappear as the man in red on day 23. That day, an EZIC messenger gives the inspector a silver key for a sniper rifle and tells the inspector to kill Istom.

If the poison is put on his passport, he will collapse on the ground after a few steps and vomit blood. If permitted to enter Arstotzka, a guard (never Sergiu) will check him and collapse as well. If denied entry, several citizens will collapse and vomit blood instead; no guards are hurt. The next day, the news will cite that a mysterious poison hospitalized several people. 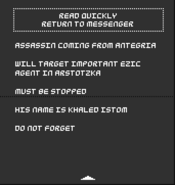 The front of the EZIC envelope containing the poison. 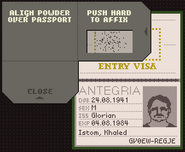 Putting the poison on Istom's passport. 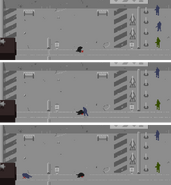 Istom and a guard collapse if his passport is poisoned and entry approved. 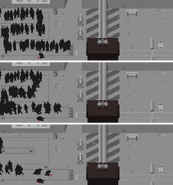 Panic ensues after Istom collapses when his passport is poisoned and entry denied.

Day 21 article about the poisoning.
Community content is available under CC-BY-SA unless otherwise noted.
Advertisement