The Order of the EZIC Star, or just EZIC, (sometimes called "the Order") is a mysterious organization in Papers, Please.

The inspector has to choose between ignoring EZIC or cooperating with it during the game. Depending on the degree of cooperation, different endings will occur. Ignoring the five tasks EZIC gives (see below) will lead to ending 20. Completing four or more EZIC tasks can lead to ending 19. Falling anywhere in between will usually get the inspector killed in the end unless he chooses to flee from Arstotzka.

EZIC claims the main cause of the organization is to free Arstotzka from its greedy and corrupt leaders,[1] but the political ideology of The Order is not specified. Endings 15 and 19 hint that EZIC's aims and methods are ironically not at all dissimilar from the autocratic Arstotzkan regime, a theme also explored in developer Lucas Pope's game The Republia Times.[2]

The organization asserts that it existed by the period Arstotzka was established and served the same function as in the time the events of the game take place.[3]

The inspector first encounters EZIC when a mysterious hooded messenger hands him a black card on day 8. On the back of the card, the name Corman Drex is shown, and the inspector can give the card to them when they arrive at the border. If the inspector does not give Corman the card at that time, they will reappear a day later, tell the inspector that he has something to give them, and will not leave until the inspector gives the card. They will then hand over a note explaining the intentions of EZIC. Once the note is returned, the inspector will receive a cipher with a long string of letters and numbers on it, which will be used later on with a decoder received on day 10 to show the names of two EZIC agents, Mikhail Saratov and Stepheni Graire.

A few days later, EZIC will give the inspector 1,000 credits with the option to burn it. The amount doubles to 2,000 on day 12 if the inspector refuses. If he does not burn the money at either opportunity, all of his savings are later confiscated. If the inspector lets another EZIC agent come through a little later, he is cleared of wrongdoing but the money is not returned.[4] If the inspector accepts either one of those gifts and does not let Stepheni Graire in, ending 4 will occur.

EZIC will continue to give the inspector money in exchange for letting an agent pass on day 17 and poisoning a would be assassin on day 20. An EZIC messenger will appear at the beginning of the day to brief the player on the day's needs.

On day 23, EZIC will ask the inspector to kill a man in red who presents a threat to EZIC.[5] Shooting him with the sniper rifle leads to ending 9 while shooting him with the tranquilizer gun leads to ending 10. If he is not attacked at all, then a day later, a messenger arrives to inform the inspector that the man in red is now targeting EZIC agents in Kolechia and the Order must adapt their plans.

An opportunity presents itself when tension between Arstotzka and Kolechia keeps growing and a diplomatic meeting is called between the two countries. On day 27, EZIC requests the inspector's help in order to infiltrate the negotiations with a passport confiscated from a Kolechian diplomat.

Despite much of its involvement in the story, EZIC claims that it is not behind the attacks that have plagued the checkpoint in its first month of operation.[6]

On day 31, however, EZIC attacks the border directly. It aims to seize power in Arstotzka and demolish the wall that divides Grestin.[7] [8] During the attack, the inspector can either help EZIC and join it or remain loyal to Arstotzka and defend the checkpoint. The eventual fate of the inspector varies depending on where his loyalties are earlier in the game (see below and endings 13, 14, 15, 17, 19 and 20).

There are five EZIC tasks that count towards getting ending 19 (the "good" EZIC ending) where EZIC agents blow up the wall on day 31, EZIC seizes power, and the inspector will be hired as an EZIC agent. To get this ending, the inspector needs to complete at least four of the five tasks listed below:

Note that these are the only tasks that will affect or prevent getting ending 20. Any other interaction, even if it involves people from EZIC, does not count. This includes giving Corman Drex a note back on day 8 or 9, accepting bribes, or shooting the man in red on day 23 (although doing the latter will end the game).

Completing any of the five EZIC tasks prevents getting ending 20. 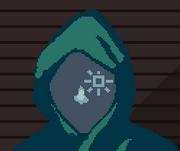 The card with Corman Drex's name on it. 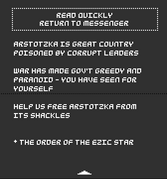 The note Drex gives to the inspector. 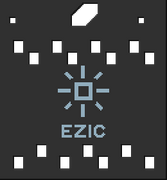 The decoder used to read the cipher. 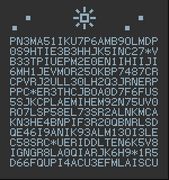 The cipher bearing the names of Mikhail Saratov and Stepheni Graire when read with the decoder. 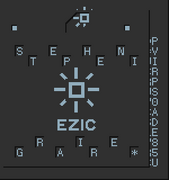 Graire's name shown with the decoder.

The paper M. Vonel shows the inspector when investigating a suspicious group. 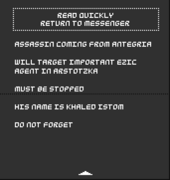 A note about Khaled Istom.

The package of poison an EZIC messenger gives to the inspector.

Using the poison on Istom's passport. 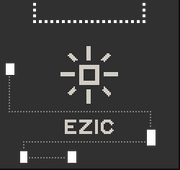 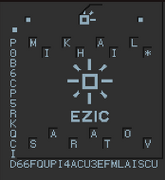