EZIC Member
Corman Drex is the first undercover EZIC operative the inspector meets. Unlike an EZIC messenger, whom the inspector meets earlier the same day, Drex looks like a regular entrant and carries a passport and other documents.

Drex's full name and nationality are static information. Their sex, appearance, and passport data are procedurally generated every playthrough. The character can appear twice (on day 8 and day 9) but since the aforementioned information is randomized, Corman Drex on day 8 usually looks different from Corman Drex on day 9. It could also simply be an alias used by EZIC agents.

Drex is the ninth entrant on day 8. On the same day, an EZIC messenger who shows up as the fifth entrant, gives the inspector a black slip of paper with the EZIC symbol on one side and the name "Corman Drex" on the other. No further instructions are given, but the inspector is expected to present the paper when Corman Drex arrives.

If the inspector does not give Drex the paper on day 8, they will show up again the next day. This time, they will ask for the paper and will not leave until the inspector gives it to them. Giving the note to Drex is mandatory and does not prevent getting ending 20 (where the inspector needs to avoid all five tasks EZIC gives him).

After receiving the paper, Drex will hand the inspector a note and asks him to read it quickly. It says that Arstotzka is a country with corrupt leaders, and EZIC is attempting to free it with help from the inspector. After the inspector returns the note to Drex, they will give him a cipher with a long string of letters and numbers on it and leave. The cipher can only be read through a decoder another messenger brings on day 10.

If given the note bearing their name:

In the latest beta:

When given the EZIC note back:

Upon getting their documents back on day 8 but not given the EZIC note back:

Upon getting their documents back on day 9 but not given the EZIC note back:

When given the EZIC note back in the beta version:

Upon getting their documents back on day 9 if the note has not been given yet:

The following are images of the notes mentioned in the article.

The slip of paper an EZIC messenger gives. 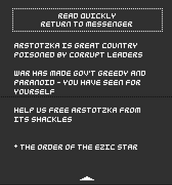 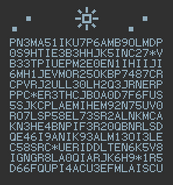 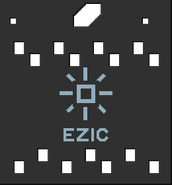 The decoder given on day 10.
Community content is available under CC-BY-SA unless otherwise noted.
Advertisement